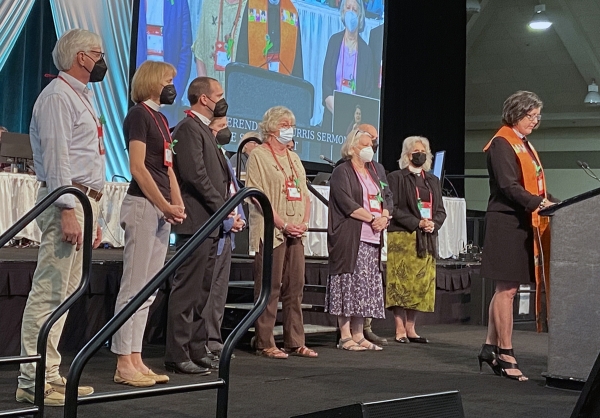 The Rev. Candice Frazer, chair of the deputation from the Diocese of Alabama, addressed the House of Deputies July 8 on Resolution A226, which honors victims and survivors of the June 16 shooting at St. Stephen’s Episcopal Church in Vestavia Hills, Alabama, as the other Alabama clergy and lay deputies stand by her side. Photo: Melodie Woerman

[Episcopal News Service] At the end of its morning session on July 8, members of the House of Deputies rose in unanimous, silent affirmation of Resolution A226, to recognize, honor and lament the three members of St. Stephen’s Episcopal Church in Vestavia Hills, Alabama, who were murdered June 16 by a man who was attending a potluck supper at the church. The resolution also recognized the surviving 18 church members and friends who were there that night.