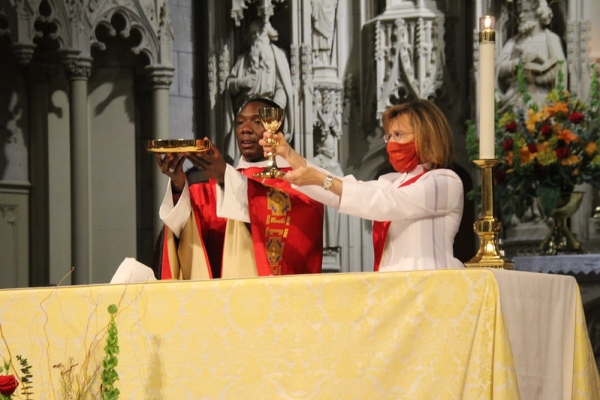 We Episcopalians believe in a loving, liberating, and life-giving God: Father, Son, and Holy Spirit. As constituent members of the Anglican Communion in the United States, we are descendants of and partners with the Church of England and the Scottish Episcopal Church, and are part of the third largest group of Christians in the world.

We believe in following the teachings of Jesus Christ, whose life, death, and resurrection saved the world.

We have a legacy of inclusion, aspiring to tell and exemplify God’s love for every human being; women and men serve as bishops, priests, and deacons in our church. Laypeople and clergy cooperate as leaders at all levels of our church. Leadership is a gift from God, and can be expressed by all people in our church, regardless of sexual identity or orientation.

We believe that God loves you – no exceptions.

Liturgy is the term for the church's sacramental rites and texts used in public worship. In An Episcopal Dictionary of the Church (Church Publishing, 2000), Don S. Armentrout and Robert Boak Slocum explain that "liturgy expresses the church's identity and mission, including the church's calling to invite others and to serve with concern for the needs of the world." Although many liturgies of The Episcopal Church are included in the Book of Common Prayer, newer liturgies, such as same-sex blessings and rites for departed pets, are developed and reviewed by The Episcopal Church's Standing Commission for Music and Liturgy on an ongoing basis.

A lectionary is a table of readings from Scripture appointed to be read at public worship. The Lectionary (1969, revised 1981) developed by the Roman Catholic Church after Vatican II provided for a three-year cycle of Sunday readings. This Roman lectionary provided the basis for the lectionary in 1979 edition of The Book of Common Prayer, as well as for lectionaries developed by many other denominations.

The Common Lectionary, published in 1983, was an ecumenical project of several American and Canadian denominations, developed out of a concern for the unity of the church and a desire for a common experience of Scripture. It was intended as a harmonization of the many different denominational approaches to the three-year lectionary.

The Revised Common Lectionary, published in 1992 and officially adopted by The Episcopal Church in 2006, takes into account constructive criticism of the Common Lectionary based on the evaluation of its trial use, and like the current prayer-book lectionary, is a three-year cycle of Sunday Eucharistic readings in which Matthew, Mark, and Luke are read in successive years with some material from John read in each year.