By Mary Chapman, Director of Music
The Episcopal Church of the Holy Communion, University City

St. Columba is arguably one of the most recognized tunes in the 1982 hymnal, and indeed, in the wider church music genre itself. This gorgeous hymntune hails from an ancient Gaelic tune which offers comfort and peace to its listeners. But I didn’t know much about the poet who lent the words to this lovely hymn. 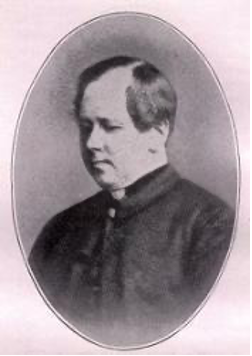 Sir Henry Williams Baker was the third Baronet of Dunstable House, who graduated from Trinity College, Cambridge, and proceeded to take holy orders in 1844. He ascended to the Baronetcy upon his father’s death in 1851, while deciding to remain a clergyman. Sir Henry became Vicar of Monkland, Herefordshire, where he remained until his death. A prolific writer, his name is associated with a number of hymns, many which were featured in the revised edition of Hymns Ancient and Modern, of which he served as editor beginning in 1858.

John Julian, editor of Dictionary of Hymnology, mentions of Baker’s writing that,

“Poetical figures, far-fetched illustrations, and difficult compound words, he entirely eschewed. In his simplicity of language, smoothness of rhythm, and earnestness of utterance, he reminds one forcibly of the saintly Lyte. In common with Lyte also, if a subject presented itself to his mind with striking contrasts of lights and shadows, he almost invariably sought shelter in the shadows.”

This may be most apparent in Baker’s The King of Love My Shepherd Is, his paraphrase of Psalm 23. He transforms the verses of the psalm into poetry which speaks to the common person, one that acknowledges one’s need for comfort and provides that succor at the same time.

Here is a rendition of this lovely hymn arranged by John Rutter, as sung by the Cambridge Singers on the album O Praise the Lord of Heaven.