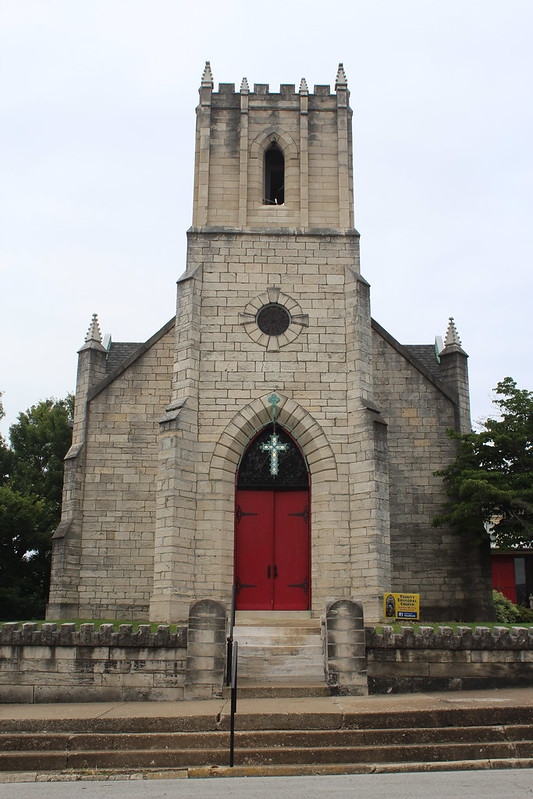 Hannibal, Missouri is perhaps best known as the boyhood home of Mark Twain and his fictional characters,Tom Sawyer and Huck Finn. The city itself was practically a character in Twain's stories.

For more than 175 years, Trinity Church has served as a landmark in Hannibal. The church was designed by Joseph A. Miller and features a deeply arched heavy wooden beamed ceiling, beautiful bronze lanterns and side wall lamps, an impressive pipe organ, and 18 illustriously conceived stained glass windows. Trinity Church is truly a historic marvel. As you step into the church, you are immediately transported back into time and enveloped by Hannibal's past.

Early church members commissioned well-known artists to design the sanctuary's beautiful stained glass windows. With signature designs by Charles Booth, Emil Frei, Jr., and the Louis Comfort Tiffany Glass Company, these windows are truly remarkable in their diverse artistic style, thematic construction and conceptual execution. With some dating back as far as 1887, they chronicle decades of changes that took place in the community, as well as in the entire country, and showcase the talents of these noteworthy craftsmen. (Read more about the windows and their architects.)

In 1960, the congregation began a fundraising campaign to expand their church facility. The funds were used to build the Memorial Guild Hall (parish hall) in 1961. The space continues to be used for coffee hours as well as other church and community organizations.

Today the small congregation is in a period of transition, with the Very Rev. Maria Evans serving as Interim Priest. The congregation supports a blessing box, which stays filled with food and toiletries for neighbors to take what they need. The parish also raises money for other outreach projects, adopts a local family at Christmastime, and works with Families and Communities Together (F.A.C.T.) to fill and distribute backpacks for local school children.

As the congregation continues to serve their community, history continues to be an ever-present character in the church's story. Visitors from Mississippi riverboat cruises stop by for tours of the historic church. And Trinity members, like Jeanne Atkins, cherish their piece of the story. Jeanne was baptized and raised at Trinity... so was her mom... and her grandmother.