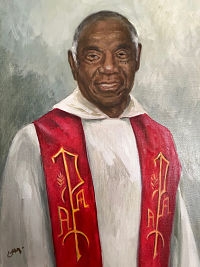 The Rt. Rev. Deon K. Johnson led a special worship service to celebrate the late Rev. Emery Washington, the namesake of one of our diocesan convocations.

Members from throughout the Emery Washington Convocation came to the Episcopal Church of All Saints and Ascension in Northwoods on Sunday, Sept. 18. As part of the worship service, the Bishop installed the convocation's dean, the Very Rev. Jon Stratton, and the convocation's warden, Adrienne Dillon. These leaders were elected by members of the convocation. (Learn more about our convocations here.)

Following the worship service, the group enjoyed food and fellowship in All Saints' and Ascension's parish hall. The celebration was highlighted by a remembrance of Emery Washington by his friend and colleague, Deacon Chester Hines.

To Bishop Deon, Priest Renee, Mrs. Alice Washington, leadership of All Saints and Ascension Church, family of the church and other gathered dignitaries and guests thank you for the opportunity to share these brief remarks regarding The late Reverend Doctor Emery Washington, Sr.

I considered Father Washington my priest, my confident, my partner in the vineyard and for a very brief period in our relationship my ordained colleague.In a phrase, he was a unique person in my life.Over the course of your twenty two year relationship I grew to love and respect him deeply.Following his retirement from All Saints Episcopal Church he became Associate Priest at Holy Communion Church where he was revered, beloved and highly regarded. There is aportrait of Father Washington that hangs over the fireplace and during my more contemplative and reflective moments I sometimes find myself stranding in front of that portrait having a conversation with him reflecting on our relationship, asking for advice and counsel, telling him that I miss his physical presence but mostly thanking him for having been a part of my life and the lives of my family.

Father Washington in addition to being a priest was a trained community organizer and I watched him used his skills very effectively again and again over time. Where he saw spiritual, emotional, political and social fracture he worked to bring about and knit healing in all of these areas. Where he saw anger and hurt he sought to bring about good will and happiness.Where he saw discord and contention he worked to bring about agreement and harmony. Through his love for God’s spirit, his professional training, the grace he held for his fellow human being, and by his unrelenting determination he changed the course of the people and institutions deficiency and non performance to accomplishment and blessing.He people and institutions to recognize something greater than self.

Father Washington could in his day be characterized as this diocese’s renaissance man.He was a person with genuine competence in and understanding of multiple different fields, all of which complement one another to make him a more talented and productive person.He was skilled at multiple tasks and had a wide range of knowledge in many fields.He was highly educated, a gentleman, cultured in the arts and charismatic and he was smooth in his interactions with all people; he always performed at the top of his game.

As we celebrate and install the leadership of the Emery Washington Convocation it is good, right and appropriate that we reflect on and recall the life and times of the man who played a significant part in bringing us here today.

On a personal note I am sharing with you how Father Washington thought about his parishioners, behaved toward his congregation and the love that he gave to me.It was a Sunday morning and my week had not been one of my more stellar experiences; even the Saturday before which was my exhaling time had not been successful.When I arrived at church it all came down.I found myself sitting on one of the benches in the parish hall. Alone and feeling apart form community. Father Washington happened to walk by on his way to the completion of his Sunday morning tasks and immediately without any exchange of words read my distress.The first words out of his mouth was “What’s wrong?”I couldn’t express it in words but simply asking “would you pray for me”, expecting that he would say yes and include me in his prayers later in the day or during the week.Remember this is a Sunday morning with all of the required preparations to complete for the first service.I was in a state of emotional distress but to my surprise, Father Washington stopped what he was doing and sat down next to me; laid his hand on my shoulder and began to pray for me; he did not know the particulars of the current stress but he prayed fervently for my healing, well being, health and comfort.Now even though my stress was not immediately relieved, the fact that he would take his time on a busy Sunday morning to give me his personal attention is something I will never forget and forever appreciate.Be shepherds of God’s flock that is under your care, serving as overseers—not because you must, but because you are willing, as God wants you to be; not greedy for money, but eager to serve; not lording it over those entrusted to you, but being examples to the flock (1 Peter 5:2–3).A good servant always seeking the interest of others before his own, that was Father Washington. Amen.