Set us free, O God, from every bond of prejudice and fear... that we may show forth in our lives the reconciling love and true freedom of God...."


God acts on the behalf of the oppressed...

The Rev. Shug Goodlow, Assistant Rector at St. Martin's Episcopal Church in Ellisville, is the new Chapter President. She says UBE is committed to the Episcopal Church, believing that diversity of witness is essential if the larger church is to be faitful to Christ and successful to its mission to the world.

"It was our hope that forming a new diocesan chapter would be seen as a sign of support and affirmation of our shared witness for racial justice and reconciliation in our churches and communities," said Rev. Shug.

The chapter is named after the Rev. Emery Washington (1935-2015), a clergy member of this diocese who is remembered as a mentor, community organizer, and lifelong student of the Bible and human nature. Washington was called as rector of All Saints' Episcopal Church in 1983 and was a founder of the Dismantling Racism Commission in the diocese. He was instrumental in developing Seeking Our Past, Creating Our Future, the commission's resource material for congregations to begin conversations about their racial history. He retired in January 2002, but remained an active social justice advocate and continued serving as a supply priest throughout the diocese.

Everyone is invited to become a member of The Emery Washington Midwest Chapter of UBE. Some in our diocese, including Bishop Deon Johnson, are already members of the national organization and can have their memberships transferred to the diocesan chapter. Our chapter will have regular meetings and provide an opportunity for members to live into our Baptismal Covenant as we "seek and serve Christ in all persons" and "strive for justice and peace among all people, and respect the dignity of every human being."

"I hope that our chapter will become a visible, viable, active entity both in our diocesan and national levels," said Rev. Shug. Her goals for the group include establishing a scholarship for students attending Historically Black Colleges and Universities (HBCUs) and being in conversation about racial justice and reconciliation issues.

Along with Rev. Shug serving as President, other officers of our new UBE chapter include:

If you are interested in learning more or becoming a member of our diocesan chapter of UBE, please contact the Rev. Shug Goodlow.

Watch this page for more information as the chapter begins their regular meetings. 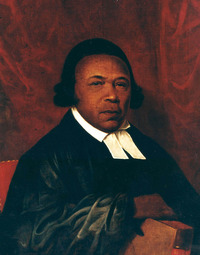 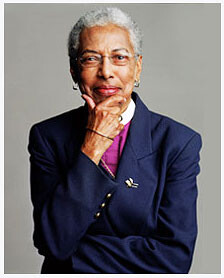 Beginning with the establishment of St. Thomas Episcopal Church by Absalom Jones (left) in 1794 in Philadelphia, through the election of Barbara Harris (right) as Suffragan Bishop of Massachusetts in 1988, there has always been a strong corps of Black Christians in the Episcopal Church.

Organized in 1968 as the Union of Black Clergy and Laity, the Union is the proud inheritor of the work of these people and earlier organizations, like the Convocation of Colored Clergy and the Conference of Church Workers Among Colored People, all dedicated to the ministry of Blacks in the Episcopal Church.

The name was changed to the Union of Black Episcopalians in 1971.

The Union of Black Episcopalians is a confederation of more than 55 chapters and interest groups throughout the continental United States and the Caribbean. The Union also has members in Canada, Africa, and Latin America.

Learn more about the Union of Black Episcopalians.