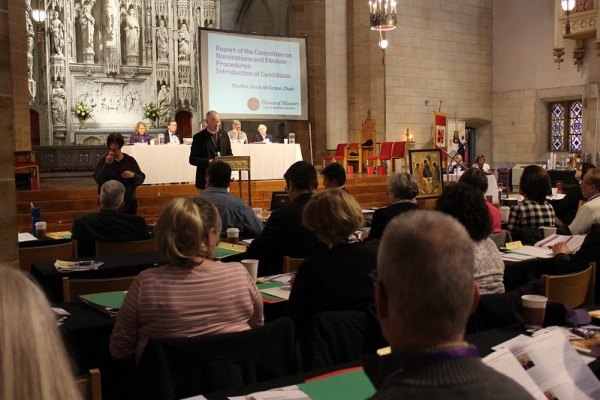 The nominations committee meets by June 1 of each year with appropriate representatives of the Offices of the Bishop to determine the vacancies to be filled by election at the following convention of the Diocese of Missouri. By June 30, the committee will contact the president/chair of each convocation, president of the Standing Committee, the vice-chair of the Diocesan Council and the bishop to solicit suggestions for potential candidates.

The committee collects written consents and biographical information from all candidates. (Canonical.) The committee then forwards the nominations with appropriate documentation to the Secretary of Convention no fewer than fifty (50) days prior to convention. (Canonical.)

The committee conducts elections under the direction of the presiding officer. (Canonical.)

The committee will meet a minimum of once a month in June, July, and August to discuss progress towards meeting the obligations of the committee.

Registration will be available September 17, 2021.