The Stage is Set for GC80 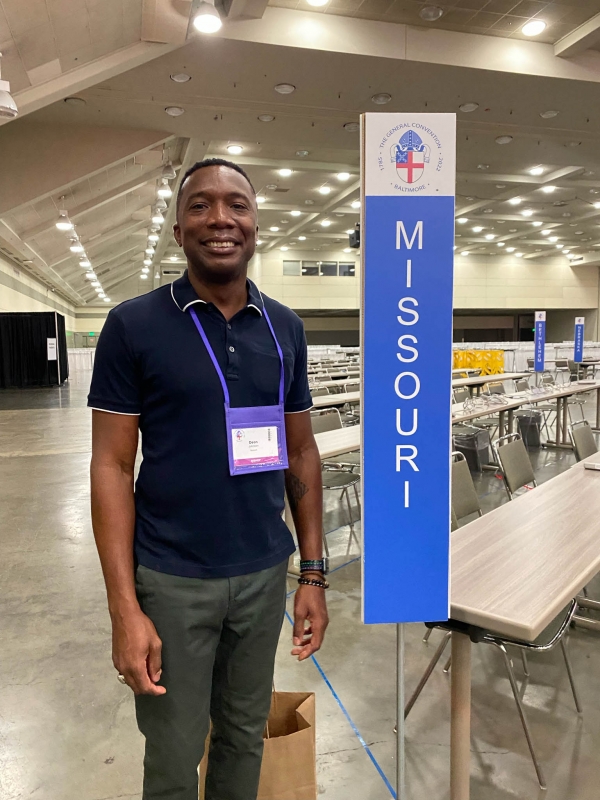 photo: (Baltimore / July 7) The Rt. Rev. Deon Johnson, Bishop of Missouri, gets a preview of our deputation's spot on the floor of General Convention.

Bishops, deputies, and volunteers from throughout the Episcopal Church -- including a dozen from the Diocese of Missouri -- are converging on Baltimore, Maryland tonight for the 80th General Convention of the Episcopal Church. The event begins Friday, July 8. Along with this wave of excitement comes the reality that this is a COVID convention, and things are going to be very different from usual.

All three leaders praised the Diocese of Maryland and the City of Baltimore for their hospitality and warm welcome. They also agreed that this convention is not what everyone had hoped for -- the convention has been shortened to four days and scaled down considerably due to health concerns over the rising number of COVID-19 infections.

The Episcopal Church had estimated the convention's economic impact for the city of Baltimore would be $21 - $25 million under their original plans. Now, General Convention Executive Officer Michael Barlowe says he expects that impact to be more like $7 million. He says the church is exploring ways to mitigate the damage their decision to shorten the convention will have, especially on the least economically privileged in the community. Barlow said they hope to book future Episcopal events in Baltimore to help make up that difference over the next few years.

Presiding Bishop Michael Curry said even though attendance will be lower than usual, it's important for the convention to take place. "Maybe not 10,000, but about 1,200 will be here. And Jesus will show up and something good will happen because we are here."

House of Deputies President Gay Clark Jennings highlighted the safety protocols that have been put in place to keep everyone attending the convention as safe as possible. Everyone is required to do rapid testing daily. Doctors and nurses are on hand to advise and follow-up with any sickness that may occur. And a pastoral support team is available to help those who have to quarantine. The church has also set up a mutual aid fund to help anyone without insurance who may get sick while at the convention.

"My message for everyone is tao act with kindness and generosity," the House of Deputies president said. "While we're doing our business, we will be who God intends us to be."

You can watch the Opening Eucharist on Friday, July 8 at 7:30 a.m. (Central Time) on the General Convention's Media Hub. Legislative sessions from both the House of Deputies and the House of Bishops will also be available live on the Media Hub.


Our deputies from The Diocese of Missouri will be submitting reports each day, which will be posted on our GC80 page on this website. We'll also be sharing stories on our social media pages.

Follow all the news from GC80 from Episcopal News Service.