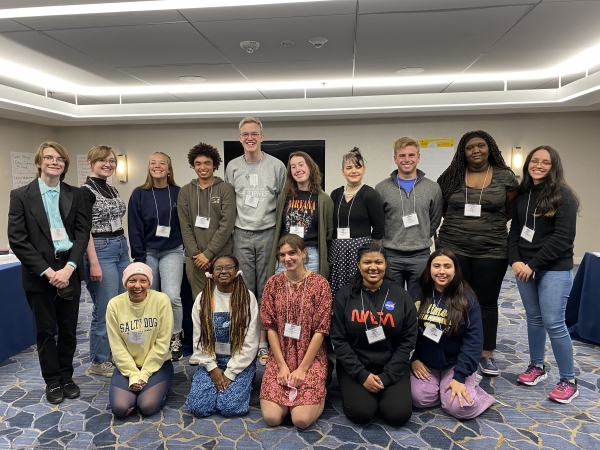 Congratulations to Benisha Brudy, a member of Trinity Episcopal Church in St. Charles, who has been selected to be part of the Official Youth Presence at this summer's General Convention.

Sixteen young people, drawn from every province in the Episcopal Church, have been selected as the Official Youth Presence for the 80th General Convention. The convention is scheduled for July 7-14 at the Baltimore Convention Center in Baltimore, Maryland (Episcopal Diocese of Maryland). The group gathered in Baltimore from March 31-April 3 for orientation and training.

The Official Youth Presence was established by Resolution B045 of the 1982 General Convention and has had seat and voice in the House of Deputies since 1997.

“I am eager to welcome the members of the Official Youth Presence to the House of Deputies again this year, and I look forward to their participation in our deliberations,” House of Deputies President Gay Clark Jennings said. “I am especially grateful to Deputy Devon Anderson of Minnesota and alternate deputy Nelson Serrano Poveda of San Joaquin for their work in helping to select the young people who will serve at the 80th General Convention, and to Deputy Anne Kitch of Newark and former deputy Sophie Kitch-Peck for participating in the group’s orientation and training.”

The following youth, listed in order by province, were selected to serve as the Official Youth Presence at General Convention:

Adult mentors for the Official Youth Presence will be:

“I am thrilled to have these amazing young leaders serving as the Official Youth Presence,” said the Rev. Shannon Kelly, director of The Episcopal Church Department of Faith Formation. “The church has a lot to learn from young leaders as we look forward to what is to come and how we as a church can respond. I look forward to learning from them, hearing about their passions, and walking with them as we all continue to learn and grow together.”

The General Convention is The Episcopal Church’s highest temporal authority and the largest gathering of Episcopalians from across the church. It meets every three years to set policies and priorities for the church’s mission and ministry. Originally scheduled before the pandemic for July 2021, the 80th General Convention was postponed one year.