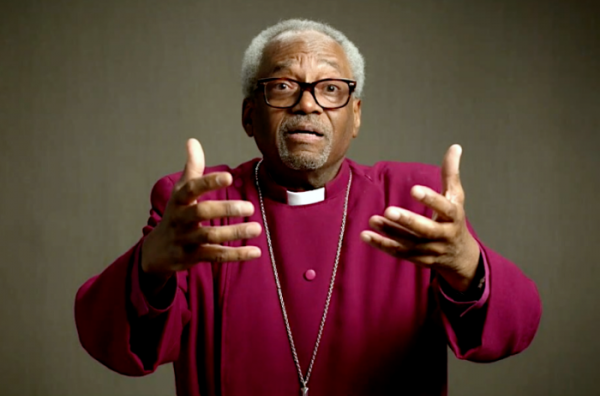 Presiding Bishop Michael Curry preached to both houses of General Convention during the opening Eucharist July 8. Curry’s sermon was a pre-recorded broadcast on screen, as bishops and deputies worshipped separately due to the convention’s COVID-19 restrictions. Photo: Video screenshot

[Episcopal News Service – Baltimore, Maryland] Opening the 80th General Convention here on July 8, Presiding Bishop Michael Curry put the gathering in context: perhaps not the grand, joyous reunion the church had craved, but a moment of orientation in “strange and difficult days.”

Preaching on the Book of Isaiah and its descriptions of the Babylonian exile, Curry compared that age of disorientation and turmoil to the past few years in the United States and the unprecedented disruption they have wrought. He listed a now-familiar litany of crises – the pandemic, the Jan. 6 insurrection, George Floyd’s murder and the resulting racial reckoning, the rise of violent white nationalism, the epidemic of gun violence, the Ukraine War and more – and offered the words of Isaiah as a way for Episcopalians to reorient themselves.

“Maybe, in the incredible providence of almighty God, the word of a prophet from the seventh century before the birth of Christ might speak to us in the 21st century A.D. ‘Look to the rock from which you were hewn, to the quarry from which you were dug. Look to Abraham, your father, and to Sarah who bore you.’”