Hymn of the Week: November 7

by Mary Chapman, Director of Music
The Episcopal Church of the Holy Communion, University City

Many people may be familiar with the Negro Spiritual (also referred to as the African American Spiritual) as a song sung by enslaved African people in the American South. And they would be correct. Those spirituals flourished in the 19th century leading up to the abolishment of legalized slavery in the 1860s, and constitute one of the largest and most significant forms of American folksong.

In Africa, music was present throughout people’s lives. They shared music and song while working or doing daily activities, and once they were enslaved, they continued their African way of worship by coming together in “praise houses,” or at outdoor meetings called “bush meetings” or “camp meetings.” During such meetings, participants would sing, chant, clap, dance, and occasionally enter trance-like states. But because white colonists considered such gatherings to be pagan, meetings had to be held in secret.

Africans had been introduced to Christianity as early as the 60 AD, but it wasn’t readily accepted. However enslaved people became fascinated by the stories in the Bible, recognizing similarities to their own lives. As Africanized Christianity took hold amongst the slave population, and because slaves were forbidden to become literate, spirituals became the way for them to share the stories of the Bible, express their faith, and share their hopes and sorrows. 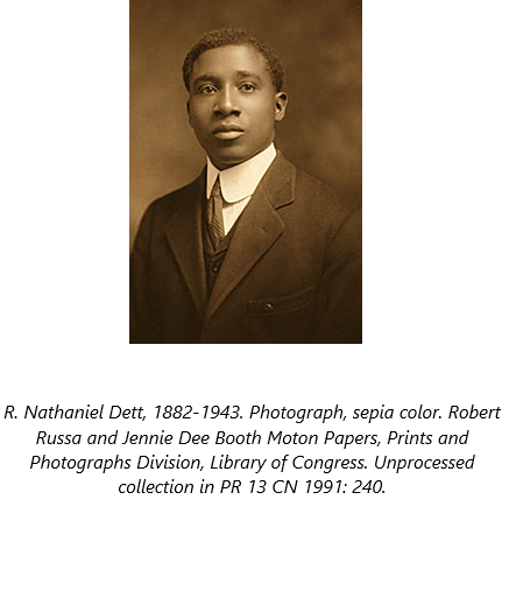 Robert Nathaniel Dett was born in 1882 of slaves who had escaped to the North, and settled in the slave-founded town of Drummondsville, Ontario. At the age of 19, he began studying piano, and three years later, he was admitted to the Oberlin Conservatory, where he majored in piano and composition. He continued his studies at Harvard University, as well as at the American Conservatory in Fountainebleu, France with famed composition instructor Nadia Boulanger. He eventually earned his Masters degree in 1932 at the prestigious Eastman School of Music.

In 1913 Dett was hired at the traditionally African American school, the Hampton Institute in Hampton, Virginia (now known as Hampton University). Under his leadership, the choir rose to a new level of excellence, and performed at Carnegie Hall in January 1914. In 1926 he became the first African American to be installed as director of the music department at Hampton. That same year, his alma mater Oberlin Conservatory awarded him with an honorary doctorate, another first for an African American.

I Want to be Ready has become one of the more popular spirituals, having been arranged by multiple musicians and recorded in multiple styles with multiple verses. It speaks of being ready to join the saints when entering the kingdom of God. Dett would have preferred this song to be performed with each beat as important as the other, creating a forward, driving motion, thus evading the “swing” feel which some arrangers and/or conductors prefer.