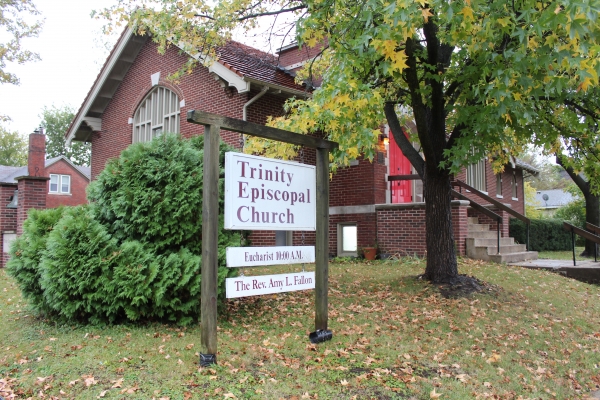 Trinity Episcopal Church in Kirksville is the northernmost congregation in the Episcopal Diocese of Missouri. Located approximately 40 miles from the Iowa border, Trinity is situated in a predominately rural region of the diocese. Kirksville, with a population of about 17.000, is the only “city” in Adair County. It is surrounded by very small farm towns.

Kirksville is probably best known for Truman State University, which is home to approximately 6,200 students and more than 300 faculty members. The university is also the lifeblood of Trinity Episcopal Church. Vicar Amy Fallon estimates 90% of the church’s members work or are students at Truman State.

“I think we are known as THE progressive congregation in town. We’re known more for our general values than any specific thing we do,” said Vicar Amy. “We are small in number, but our impact on the town is much bigger.”

The congregation is committed to hunger ministries. It is a founding congregation of the Food Pantry in Adair County, which provides food three days a week to the community. Trinity also hosts its own Little Food Pantry, which often empties within an hour after being stocked. Trinity members also partner with the local Presbyterian church to volunteer at “Take Root,” to offer drive-by meals to the community twice each month.

Trinity also prides itself on its inclusiveness. As Vicar Amy says, they are “intensely LGTBQ friendly and welcoming.” Even people who don’t attend Trinity’s worship services are familiar with and appreciate the church’s progressive values. Vicar Amy calls those people “Friends of Trinity.” When the congregation posted on social media about their Black Lives Matter flag and flag pole being stolen, an anonymous donor dropped off three new poles at the church. These Friends of Trinity are quietly supporting the church’s mission.

Trinity was founded in 1871 and the church is on the National Register of Historic Places. The first church building, a wooden structure, was constructed in 1870 on the site of the current church and served the congregation until 1916. A fire in 1907 caused major damage and had to be replaced. Well-known local architect and congregation member Irwin Dunbar was selected to design the new building, which was consecrated on November 7, 1917.

An addition was built in 2015 to provide greater accessibility and designed to bring a sense of continuity between the old and new sections of the building.