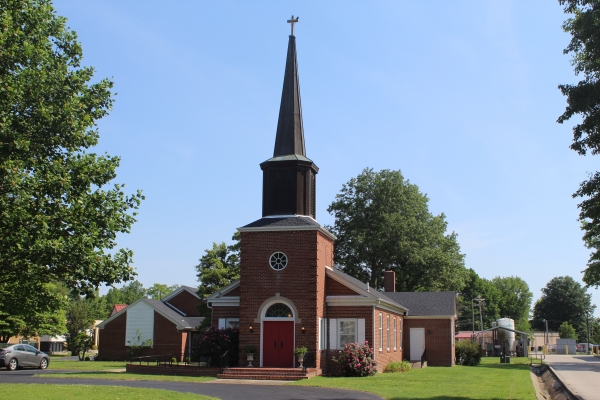 The Rev. Annette Joseph grew up in a small town and has a real affinity for congregations, like St. Paul's Episcopal Church in Sikeston, where members are like family.

"They are community-minded," said Rev. Annette. "They are fierce in their dedication to one another and what they do for each other."

That pastoral mindset is the center of St. Paul's community.

Through Sikeston's active Ministerial Alliance and nonprofit organizations like Spread Hope Now, St. Paul's members are able to reach out to their neighbors in need and make a difference in their community and beyond. They adopt local families at Christmastime and then continue to send gifts throughout the year. Members visit the elderly at local health centers and fill backpacks for students as they begin a new school year. They send money to tornado-damaged communities in Kentucky as well as organizations helping the people of Ukraine.

"We're small, but mighty!" said Linda Norton, who has been attending St. Paul's since 1979. Like others at St. Paul's, Linda places a high priority on community service. She's also a member of the parish's Episcopal Church Women ministry, serves on the altar guild, and she used to be the parish's youth leader.

St. Paul's was organized in 1947 and remained a mission of the Diocese until 1979, when it was officially admitted as a parish. St. Paul's original church building was hit by lightning and destroyed by fire on June 16, 1956. According to the diocesan newspaper Now, "The bolt struck with tremendous force, jarring the town of 13,000 with an earth-shaking concussion." The fire started in the 60-foot spire, which crashed to the ground. The congregation began building a new church that same year. A parish hall was added in the 1970s.

The lovely garden area between the church and the parish hall contains a columbarium and a stone archway used to be a part of the Dunn Hotel in Sikeston. The Hotel's owner donated the archway when the historic hotel closed.

That sense of giving is part of St. Paul's history. A former parishioner created an endowment that allows the small parish to continue its service to the community today. Rev. Annette says the endowment allowed the parish to make a $5,000 gift to a local Christian school that was financially struggling. It also allows the parish to budget $100 a month to the rector's discretionary fund, which provides gas cards, pay for hotel rooms, and other offer emergency services for people in need.

Rev. Annette serves St. Paul's as a Regional Missioner, working part-time at St. Paul's in Sikeston and Christ Episcopal Church in Cape Girardeau. She leads worship services with Holy Eucharist at St. Paul's on the first and third Sundays of each month (and every other fifth Sunday). The congregation engages in Morning Prayer on the second and fourth Sundays of each month, when Rev. Annette is serving in Cape Girardeau.