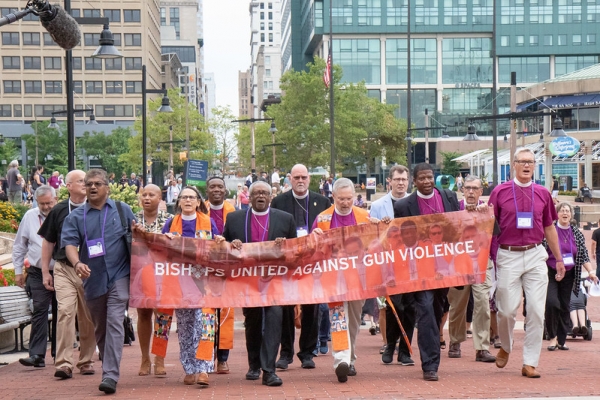 Baltimore is a beautiful city—and the convention center is right along the inner harbor, near the home of the Baltimore Orioles. On Thursday, during the day when deputies were registering for convention’s official start the following day, a confrontation between two men broke out at an intersection immediately in front of the hotel where the Missouri delegation was staying. One of the men advanced toward the other man with a baseball bat, and the other man pulled out a gun and shot him. This terrible event played out within sight of our hospitality suite fourteen floors above, and members of our delegation witnessed the attempts to respond to this attack and to attempt to save the life of the man who had been shot. These efforts were unfortunately not successful.

The following day, a core number of our bishops under the leadership of Bishops United Against Gun Violence held a Vigil on the waterfront near where these events occurred. More than one hundred deputies, bishops, and bystanders joined together to pray and appeal to God for the courage to and mourn the continuing carnage on the streets of Baltimore, and all over America. Bishops Bonnie Perry, Eugene Sutton, Susan Burton Haynes, Jennifer Baskerville Burroughs, and Presiding Bishop Michael Curry led us through prayers and exhortations against the scourge of gun violence in our country.

The liturgy began by drawing on what is known as the “Peace Prayer of St. Francis of Assisi.” A reading from Isaiah 2:1-4 followed, with our own Bishop Deon Johnson leading the prayers. An expanded version of this liturgy may be made available at a later date by the Standing Commission on Liturgy and Music for widespread use. I pray for the day when such liturgies will not be a daily necessity.

Bishop Sutton concluded the Vigil as he led us in a version of “Down By the Riverside” to conclude the service. Members of the media then interviewed the leaders of the vigil at its conclusion.