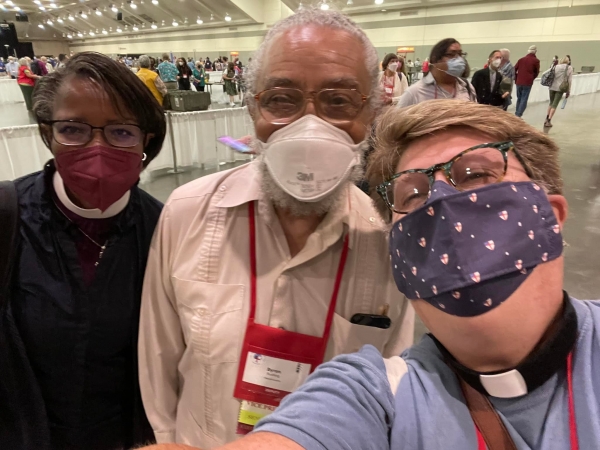 Our fourth day of General Convention in Baltimore dawned cool and sunny. We started the morning with Morning Prayer, including a sermon by Julia Ayala Harris of Oklahoma, who will be the first woman of color to serve as president of the House of Deputies. Ms. Ayala Harris officially took office when President Gay Clark Jennings handed her the gavel after we were officially adjourned in the early afternoon today.

The day had a muted but celebratory mood — a combination of exhaustion and feeling that we had accomplished so much. For those of us in the Missouri Deputation, part of that “muter” quality had to do with three of our members testing positive for COVID-19. But we persevered! We mostly dealt with mopping up votes left over from our internet connectivity issues, as well as thanking those of the President’s staff who had helped make the convention work, such as the parliamentarian and the people in charge of translation into Spanish and ASL. We lamented the absence of the official youth presence, the children’s program, and other traditional features of General Convention that had to be jettisoned due to our abbreviated, COVID-conscious schedule.

President Gay Clark Jennings also awarded several House of Deputy medals to people who had exhibited exemplary service to the House of Deputies during her tenure, including young women who have served on the executive council, our House chaplain Lester Mackenzie, and our medical advisor Dr. Rodney Coldren, whose advice helped us decrease the probable number of cases in a group our size from a projected 76 to 26 actual cases.

From my own experience with President Jennings over the last few years as a relative nobody in the wider Church, I have been amazed by her grace, her incredible memory and personability, her sense of humor, and her ability to keep us on track while being kind and encouraging. She has made it her mission to nurture and develop a wide array of leaders in the Church, seeking out especially younger generations and people from under-represented groups.

Many historic accomplishments crown this 80th General Convention. The incoming president of the House of Deputies is the first Latina woman to serve as president, and the vice president elected is the first Indigenous woman to serve in that role. Together with the House of Bishops, we expanded the definition of the prayer book and finalized a budget for the next two years until the 81st General Convention in Louisville, Kentucky in the summer of 2024. We discussed our commitments to racial justice and creation care.

From a personal level, what I enjoyed most was getting to meet friends I have made on social media in real life, in three cases for the first time. I also was fascinated by the passion and drive of so many within our denomination in working to bring about the kingdom of God right now and to engage in mission with the world outside our spiffy red doors.

We actually finished a bit early, which was wonderful as we had some time to rest before many of us enjoyed Maryland Night festivities. Mine included a delicious gourmet sack lunch followed by a water taxi tour of Baltimore’s inner harbor at sunset. Tomorrow most of us set out to return home, glad for having done so much in such a small amount of time, dreaming of a good long rest in our own beds.

I conclude by offering you a variety of links to further information: