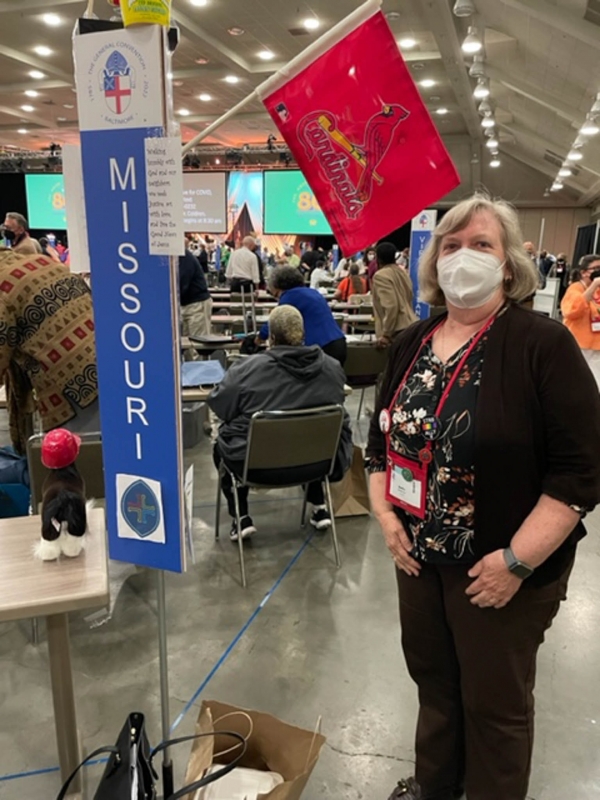 Day Two (Saturday, July 9) at the 80th General Convention of The Episcopal Church.

I remember when I first started to downhill ski – how it took a few hours on the first day to finally find the rhythm of how to latch onto the T-bar going up the bunny hill and then get down the hill without falling. That’s a bit how I felt four years ago in Austin (GC79), as I listened to the steady flow of Resolutions brought to the floor for consideration by the House of Deputies (HoD), some with amendments from the floor, others voted down, a group of Resolutions Adopted on the Consent Calendar (see Michael Booker’s report to learn about that), with maybe a few pulled to be placed on the Legislative Calendar because they needed further discussion prior to voting. I tried to keep up – but there was a rhythm to the process that I had to learn. Similarly, I visited quite a few Legislative Committee meetings, trying to understand the dynamics of a group of Bishops and Deputies that met together, debated, clarified, and amended resolutions together, but voted on each resolution separately by Order (Bishops/Deputies). It was fascinating!

This year I GET IT! Assigned to the Dispatch of Business Legislative Committee and as liaison to another Committee, I attended virtual meetings for both between February and July. I now know how resolutions flow from submittal to perhaps being revised, then adopted, rejected, or referred to another committee for review and reporting at the next General Convention.

On Friday one of the highlights was The Bishops Against Gun Violence vigil, bringing attention to a shooting death near our hotel the previous afternoon (Rally of Witness - Bishops United Against Gun Violence and #gc80 - YouTube). Bishop Deon was one of the bishops who made it happen! One resolution that elicited tears was A226 recognizing, honoring, and lamenting the three members of St. Stephen’s Episcopal Church who were killed and the 18 survivors of the June 16 shooting at the church in Vestavia Hills, Alabama. Although serious work took place, a thread of humor ran between those on the podium and lightened the mood of the House.

Today was election day. The HoD’s 802 deputies from 107 Dioceses selected Lay and Clergy Trustees of the Church Pension Fund, Lay/Clergy members to Executive Council (who will join Bishop Dion at the table, as he was elected to the Council by the House of Bishops!), and lay/clergy Trusties of General Theological Seminary. Most exciting was being involved in electing the next President of the House of Deputies, as President Gay Clark Jennings has met the office’s term-limit. Julia Ayala Harris was elected on the third ballot. She is a lay member in the Diocese of Oklahoma, proud to be the first woman of color (Latina) to be elected as President of the HoD, and a self-proclaimed “church geek.” President Jennings will be deeply missed after serving for 10 consecutive years, but President-elect Ayala Harris will have us trying many new things as we come out of the pandemic.

Tears of joy – unanimous Adoption of resolution D050 approving the reunion of the Diocese of North Texas (formerly the Diocese of Ft. Worth before the Anglican Church of N.A. usurped their name, their property and buildings, and all the monetary resources donated through the decades by Episcopalians) into the Episcopal Diocese of Texas. The Dio of Texas Canon to the Ordinary testified to their excitement for the future, blotting tears and jokingly saying, "It’s a little dusty in here." And tears of concern for women who might be deprived of emergency heath care during future General Conventions if they are held in states where abortion is illegal. Group prayer is a constant within the HoD; we’re not allowed to sing for COVID safety, however today I heard many of us quietly singing along with a praise song!

It's truly an honor to represent the Diocese of MO in the governance of our Church. I’m grateful for the opportunity and trust that YOU have given to us – and look forward to the last two days of legislation.