Epiphany: from the Greek epiphanies meaning “appearance” or “manifestation,” and refers to the manifestation of Jesus Christ to the world. 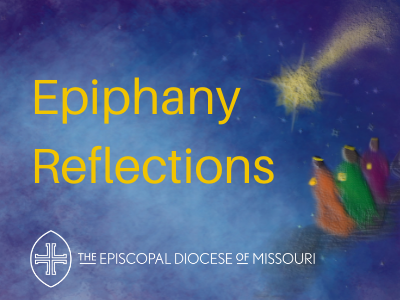 I think most of us think of Epiphany as a warm, comfortable thing: the star appearing in the East; a babe sleeping in a manger. And, again I think for most of us, this is expanded in ordinary life to mean God is revealed in various ways. And, again, these are often thought of in comfortable, reaffirming ways: perhaps a beautiful sunset or a meadow brimming with flowers.

But have you ever wondered what it would really be like to encounter an angel of the Lord? A messenger or a message from God? As exciting as an Amazon delivery? Probably not.

I suspect most of us believe, when asked, that God does, indeed, show herself continually. Again, when we see a beautiful vista or a rainbow following a storm, it’s easy to see God manifested. A kindness shown to a stranger — surely so. It’s harder to see God is with us in the dark places of life.

I remember once when I was in a hospital undergoing tests, and I was lying on a gurney down in the basement alone waiting for someone to come and get me. I was laying there, for some time, no one going by, staring at the ceiling. And then a nurse appeared and without a word laid her hand gently on my shoulder as she passed. Such a small gesture, but was that comfort from God? I don’t know, but I like to think so.

On the eve of this Epiphany season, my hope for us all is to think about being willing to accept God’s manifestations. To see them, recognize them, and be prepared to receive them.

I say this for a reason. I’ll tell you of a time when I believe I had such an encounter and was not prepared and reacted in a way I’ve regretted to this day.

A few years ago, I was going with the Confluence Spirituality group to Iona, a small island in the Inner Hebrides of Scotland. It’s the site of an Abbey from the 6th century, and a place recognized as the birthplace of Christianity in Scotland. Confluence leads a group on a pilgrimage to this island every two years.

We arrived in the late afternoon, and some in our group went to an evening service at the Abbey. I did not, and rested from the long trip there. I awoke the next day feeling very content and ready to begin, feeling nothing in particular, neither greatly excited, or expectant or anything. A very ordinary morning. I walked with several people from our group to attend a morning service and we made our way into the church. As we began to be seated, all kind of bunched up and scooting down to make room, I took my seat and looked up and almost lost it. I started to burst into tears. I truly thought I was literally going to begin to sob. Not cry, sob. I was so shocked, I’m sorry to say that I exerted every ounce of self control to not give in. I’m not sure why I did that. To avoid embarrassing myself; to avoid making a scene — part of it, no question. I don’t think even those taking their seats around me suspected anything or noticed anything. But I was shaken to my core. What just happened? Where did that come from?

I’ll leave you to decide that. To me, as I think back on it and try to make sense of it, it was as if God tried to embrace me, and I was overwhelmed and drew back. You may have another view.

I can tell you what it felt like. I felt utterly emptied, almost as if I would collapse. Another emotion I would describe would be like a child who’s been lost and then finds a parent or grandparent who enfolds them in their arms. How does that child react? Exactly. That’s what if felt like — and all in a matter of seconds. How so much could be enfolded in a mere tick of time I have no idea. I can only tell you what it felt like.

One thing I find interesting in retrospect is that this encounter took place not in one of the soaring chapels of the world (no Sistine Chapel here), but in a cold, dark, damp, narrow nave in a far off corner of the world.

I can tell you the rest of the trip was pretty uneventful. There was a lot of fellowship, some wonderful, prayerful moments and experiences, without question, but no more bolts of lightning. Perhaps someone decided we better take it easy with this one.

I’m not sure what would have happened if I had given in to that experience, but I can tell you I have great regret that my earthly side, if you will, won out in that moment.

I think of this often, but most intensely as Epiphany approaches each year. And I tell you this story only to say, not only to you but to myself as well, to take particular care in this season to open ourselves to the possibility of truly coming face to face with a God who manifests himself to us.

Epiphany Reflections 2022
offered by
CONFLUENCE, a Center for Spirituality in the Diocese of Missouri
dedicated to providing opportunities and resources for spiritual formation.