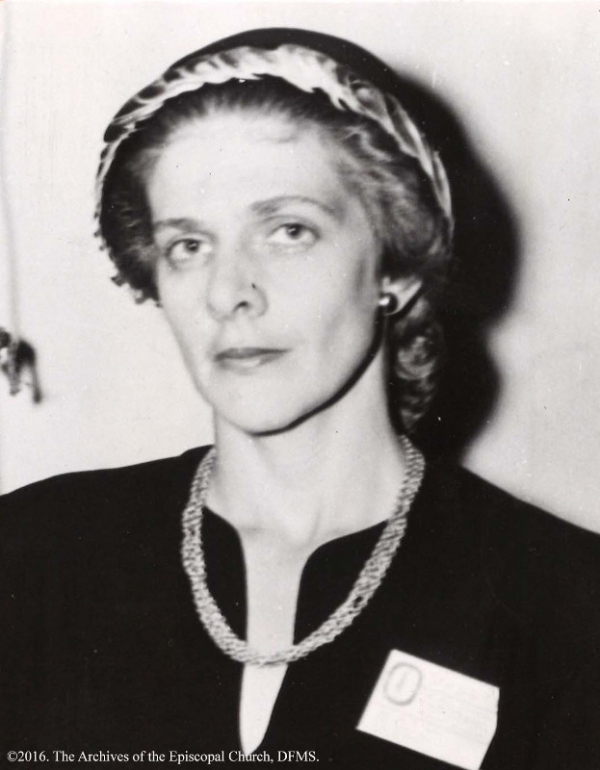 The following is an article from the Episcopal News Service, published March 16, 2012. The article was written by Sarah Bryan Miller.

[Episcopal News Service] She was a reluctant revolutionary. Reticent and shy, Elizabeth Huntington Dyer of Saint Peter’s Church in St. Louis, Missouri, had to be persuaded to become the first woman lay deputy to General Convention in 1946.

Known as Betsy to her family and friends, Dyer was born in 1906 in Providence, Rhode Island. A cradle Episcopalian whose brother was a priest and whose uncle was a bishop, she had deep New England roots. But in 1927, she married a man with almost equally deep roots in St. Louis: Randolph Harrison Dyer, a descendent of the city’s co-founder, Auguste Chouteau.

The Dyers, who lived in the city’s Central West End, were active members of St. Peter’s, and had three children: Elizabeth, Clarissa, and John. He was a businessman; she was a stay-at-home mother.

“She and Daddy had always been very, very interested and involved in the Church,” said her daughter, Clarissa D. Gordon. “They always had a lot of clergy friends.”

In 1946, some of those clergy friends decided that Betsy Dyer should represent the Diocese of Missouri as a lay deputy at that year’s triennial General Convention in Philadelphia. “It was a well-planned move on the part of many,” wrote the Ven. Charles F. Rehkopf, archdeacon of the Diocese of Missouri, in an 1989 letter.

“It was Bishop (William) Scarlett who persuaded Mother to do this,” said Gordon. “She was exceedingly apprehensive. She was reticent and shy, and she thought, ‘I’m not qualified to do that.’ But Bishop Scarlett made push after push after push,” and she finally acquiesced.

Betsy Dyer’s ecclesiastical relatives were a part of the clerical calculations. Her uncle was a member of the Anglo-Catholic wing, which as a group was a tad slow to accept the full participation of women in the Church. “Some of us,” wrote Rehkopf, “felt the Anglo-Catholics would block the seating of a woman and that a relative of someone as well known as Father Huntington would be difficult” to turn away.

Dyer was nominated by the then-rector of St. Peter’s, the Rev. Dr. Clifford L. Stanley, later a professor of theology at Virginia Theological Seminary. Stanley, recalled Archdeacon Rehkopf, felt that “it was time for women to have a voice in the convention. She was elected on the first ballot.”

It was by no means certain that she’d be seated at General Convention, however. “We went with her,” said Gordon, then a high school student. The family spent their summers in a small town called Heath, Massachusetts, escaping the St. Louis heat. That year, they made a detour to Philadelphia.

Elizabeth was at college, but the rest of the family watched as “Mrs. Randolph H. Dyer” presented her credentials in Philadelphia. “Daddy, John and I sat in the balcony and looked down on all of it,” said Gordon. “Mother was seated, but they were very clear that this was just for this one time.”

The Journal of the House of Deputies reports that – after the House was called to order, a passage of scripture was read, and a prayer said – “The Secretary inquired of the House if there were any objections to the seating of any member whose name was called.” Sure enough, a question was raised about seating “a woman who had been elected as a deputy.”

A legal opinion was sought from Judge Augustus N. Hand, a lay deputy of New York. According to the Journal, he “said interpretation of ‘layman,’ ‘person’ and ‘man’ in statutes was all-inclusive.” According to a Reuters News Service story that ran in the St. Louis Post-Dispatch, he “told the assembled delegates that it would be ‘preposterous’ to limit the word laymen to the male sex.”

Judge Hand moved that Dyer be seated, and, eventually, the motion carried. She was elected to head Missouri’s lay delegation to that Convention.

“The next morning,” said Gordon, “Daddy, John and I were sitting at a diner – at the counter, a real treat – having breakfast,” and saw a Philadelphia newspaper with a story on General Convention. The paper had a cartoon William Penn as a mascot “and he was tipping his hat to the first woman delegate. We were very proud of Mother.”

Were the other delegates kind to her? Were they, well, gentlemanly? “Very,” reported her daughter. “There were people up on the stage who… did not feel it was right that women be delegates. It was not a personal affront to my mother. She felt very, very comfortable and welcome – but she knew that her being a woman was an issue.”

A little less than three years later, the Dyers left St. Louis. One of the Dyers’ “clergy friends” was the prominent Wright City, Missouri-born theologian Reinhold Niebuhr; he recommended Randolph Dyer for the position of business manager at Union Theological Seminary in New York. “Daddy was very happy there,” said Gordon, “and because he was happy, my mother was too.”

The Diocese of Missouri elected another woman lay deputy to serve in the General Convention of 1949, as did three other dioceses. Despite Betsy Dyer’s prior service, they were not seated “because the Committees of the House of Deputies were ready with an interpretation of Layman that differed from Judge Hand in 1946,” wrote Archdeacon Rehkopf.

As in the case of the suffragist Susan B. Anthony, brought to trial for voting in the presidential election of 1872, an official decision was made that the word “man” referred to both men and women – except when it didn’t.

And so matters stood until 1970, when women were finally admitted to the House of Deputies. But in 1966, “Mrs. Randolph H. Dyer of Missouri” and the General Convention of 1946 were invoked in a paper summarizing the possible interpretations of those “generic words… ‘he,’ ‘his’ and ‘him'” when it came to questions of ordination to the diaconate, priesthood, and episcopate. Inclusion eventually carried the day.

As for Betsy Dyer — shy, retiring, and, according to her daughter, “a very good mother” — she remained active in the Church. Her participation, however, was in more traditionally feminine channels. Never again did she play a part on the national scene. She died in 1996 in Pennsylvania.

— Sarah Bryan Miller was the classical music critic of the St. Louis Post-Dispatch and a contributor to various Forward Movement publications, including, most recently, “Walking with God Day by Day.” A version of this story appeared in a parish history of St. Peter’s Church, St. Louis, where Miller was a member.