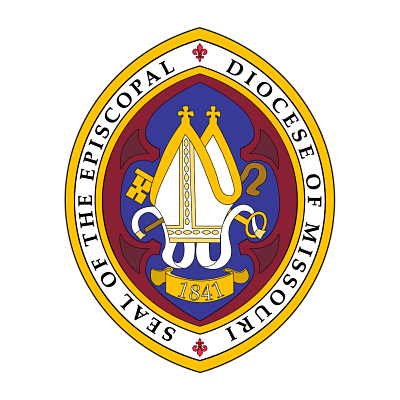 This summer brings a great deal of changes for our congregations and ministries throughout the Diocese of Missouri.

As we welcome many new clergy members in new ministries throughout the diocese (see below), we also bid a fond farewell to the Rev. Dawn-Victoria Mitchell, Rector at Trinity Episcopal Church in Hannibal, who has accepted the call to serve as Priest-in-Charge of St. Mark’s Episcopal Church in Chenango Bridge, New York. Her last day at Trinity-St. Paul’s in Hannibal will be Saturday, July 31. We are grateful to the Rev. Dawn-Victoria for her service and friendship and wish her much happiness in the Diocese of Central New York.

Here is a look at the many new additions and changes in ministry in our diocese this summer. Click on the headlines for more details on each: 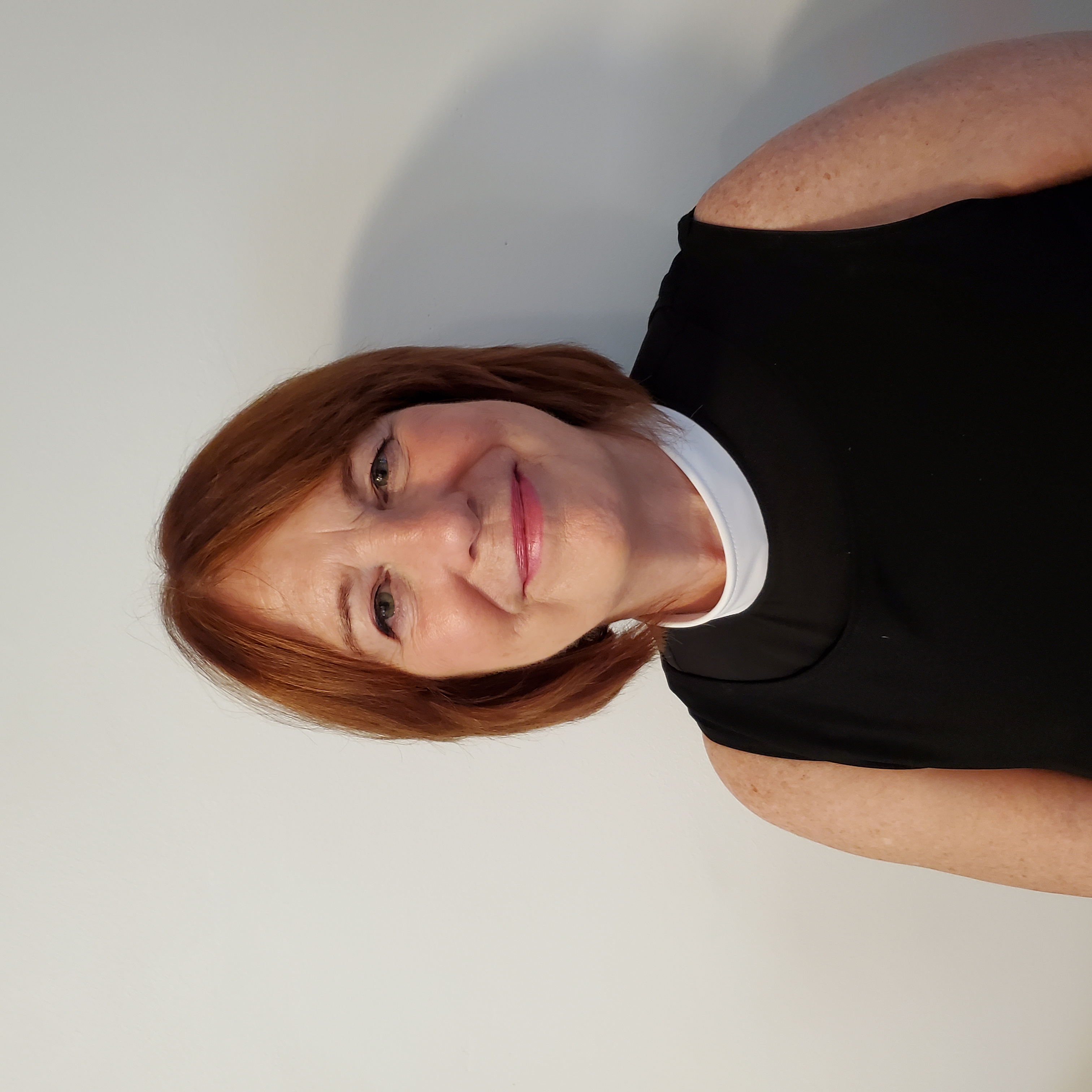 Nancy Emmel Gunn will be ordained a priest on July 23 at 7 p.m. at St. John's Episcopal Church in the Tower Grove neighborhood of St. Louis, where she has been serving as a transitional deacon since January of 2021.

Nancy is a native of Chicago, but has lived in St. Louis for much of her adult life. She has three daughters and her husband Bob has a daughter and two sons. She earned her Bachelor of Arts and Master of Education at the University of Illinois. She obtained a Juris Doctor degree from St. Louis University and has served as an attorney for more than 30 years.

Nancy received her Master's of Divinity from Eden Seminary in Webster Groves in May, 2021. 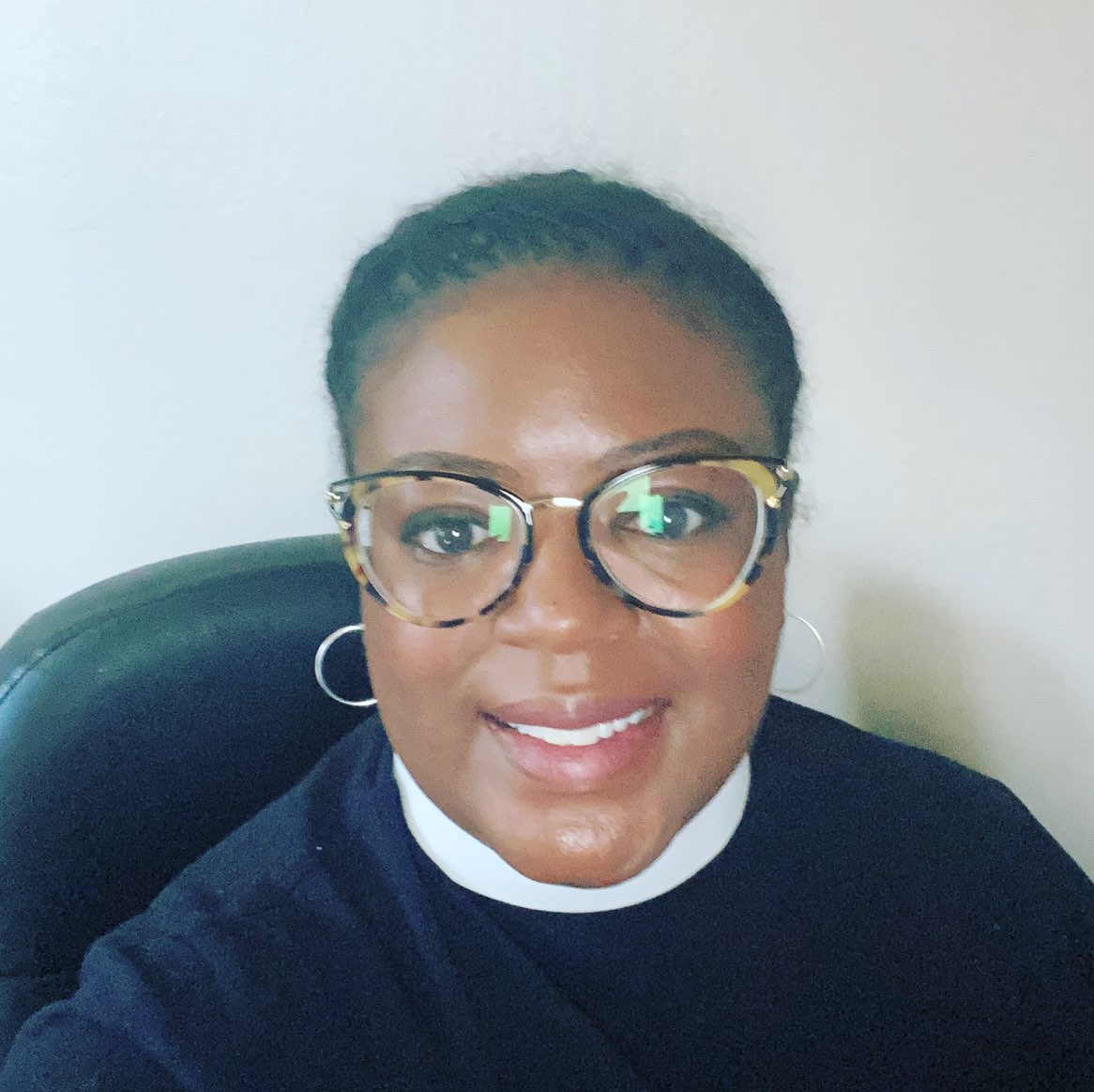 The Rev. Erika Essiem is the new Priest-in-Charge at St. Stephen's Episcopal Church in Ferguson.

Erika graduated from Virginia Theological Seminary in 2020 and Boston University School of Theology in 2018. Before coming to the Diocese of Missouri, she was Assistant Rector for Outreach and Pastoral Care at Trinity Episcopal Church in Folsom, California. 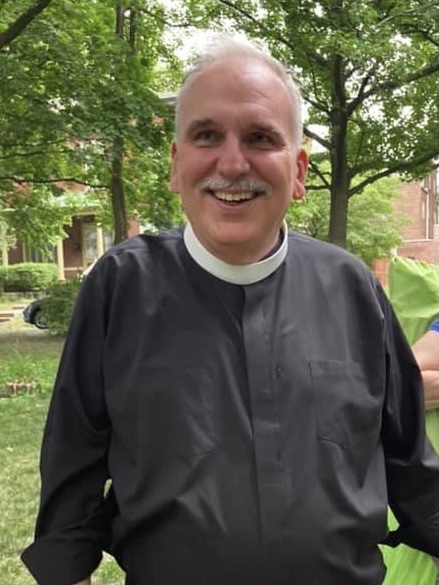 The Rev. Jeff Goldone was ordained as a Transitional Deacon June 19, 2021, at Christ Church Cathedral. He completed his course work with the Episcopal School of Ministry and Anglican Studies courses at Eden Seminary and holds a Bachelor of Arts in Foods and Nutrition from Dominican University in River Forest, IL.

Jeff is working as a chaplain at St. Louis University Hospital and Cardinal Glennon Children's Hospital. He also is the owner of J. Goldone Consulting and Training, LLC and is an instructor at Fontbonne University.

Along with serving as a Transitional Deacon, Jeff also volunteers in criminal justice ministries and services for the unhoused through Christ Church Cathedral. He loves cooking, gardening, traveling, and spending time with Clare, a 7-year old yellow lab. 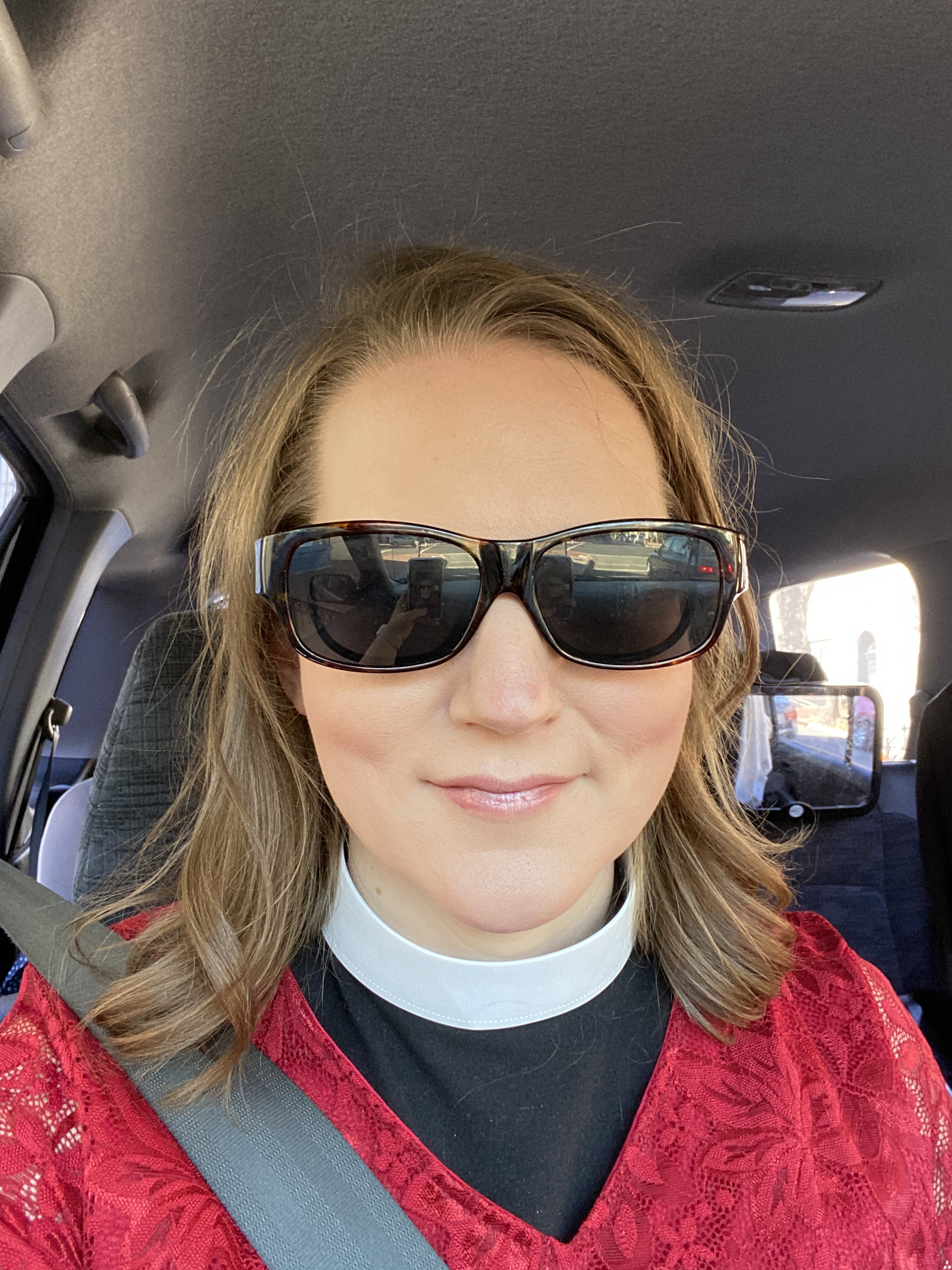 The Rev. Meg Goldstein is serving as a Transitional Deacon at Trinity Episcopal Church in St. Charles.

Meg says she is excited to be back to St. Louis after three years in Alexandria, Virginia attending Virginia Theological Seminary. While in seminary she served at St. John's in Georgetown, focusing on preaching and discipleship.

Prior to seminary Meg worked in the medical field as an administrator and attended the University of Missouri. She lives with my husband Brian, their children Felix and Linda Rose, and their cat Tigger.

Meg will be ordained as a priest later this year. 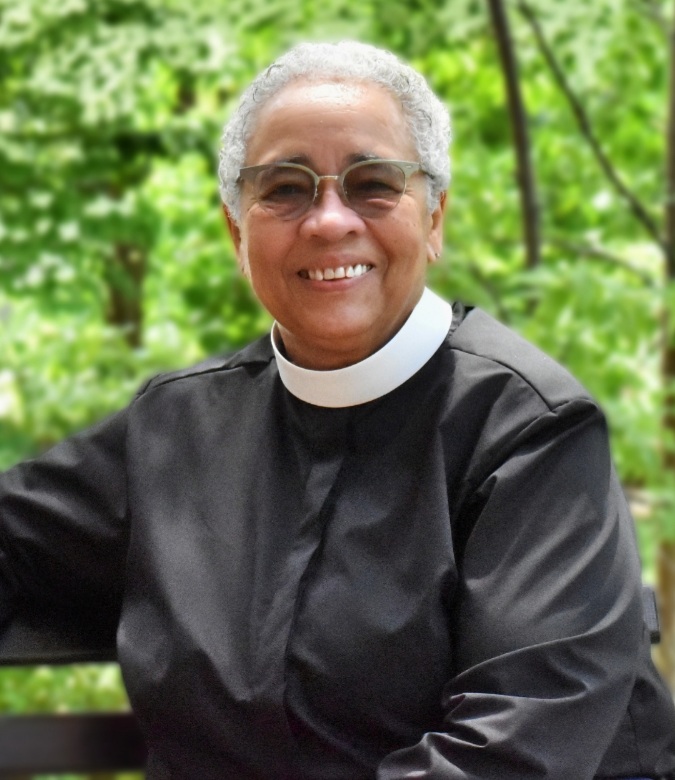 Prior to being ordained, Shug was a member of Christ Church Cathedral for more than 25 years where she served as Head Verger. Rev. Shug has been a self-proclaimed social activist since being taken to The March on Washington by an aunt and uncle in 1963. When not involved in church matters, you’ll find her working in community theatre productions. She is also an avid watcher of classic movies and a lover of trivia. She is especially proud that she “has an infinite capacity for holding on to all kinds of useless information.”

Rev. Shug currently serves on Standing Committee, as an Alternate Deputy to General Convention, as a member of the Dismantling Racism Commission, as a trustee for the Episcopal Presbyterian Health Trust (EPHT), and as President of our newly formed diocesan Union of Black Episcopalians (UBE). She is also working on the Strategic Visioning project with particular emphasis on the Formation process.

Rev. Shug lives in Kirkwood with her wife Doris. Their two daughters, Simone and Monica, live in California and their granddaughter Khloe attends Temple University in Philadelphia. 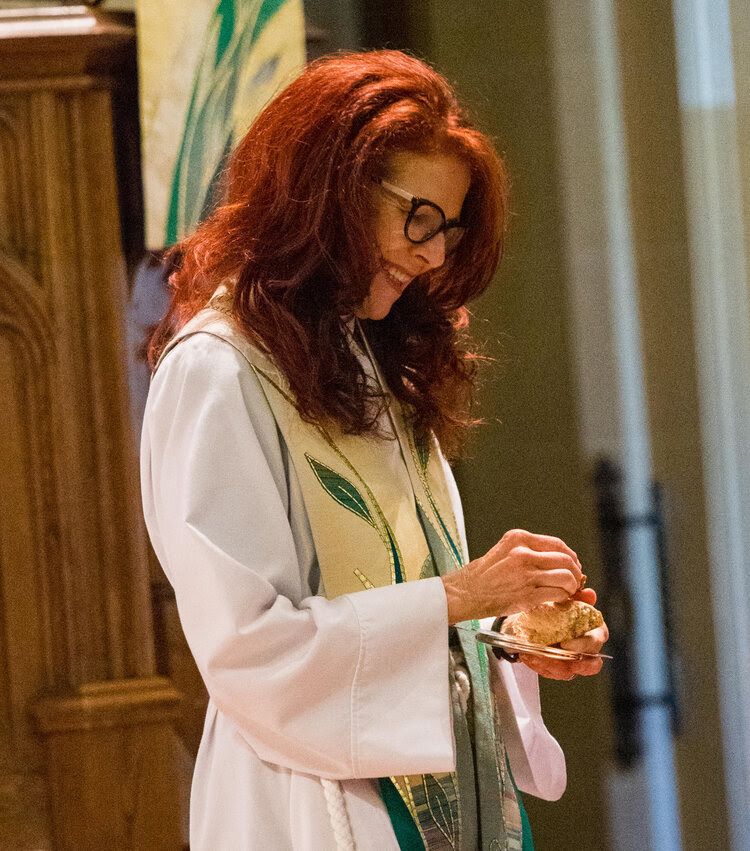 The Rev. Julie Graham is the new Associate Rector at Holy Communion in University City. She began her new position June 1, 2021.

Julie comes to the Diocese of Missouri from the Diocese of California, where was ordained and served since 1991. She served as an associate at St. Paul’s in Burlingame, California, working first to support Children and Family ministries and then expanding her role to full time associate rector, adding responsibility for the healing ministries and establishing an Invite, Welcome, Connect ministry team to orient our church to the seeker.


Julie is a life long Episcopalian who grew up in Lubbock, Texas. She attended the University of New Mexico and right after graduating headed to seminary at the Church Divinity School of the Pacific in Berkeley, California. It was during an internship in Hawaii that her fire for young people and creating new kinds of Christian community ignited.

The Very Rev. David Hodges is the new Rector at St. Peter's Episcopal Church in Ladue. He comes to us from the Diocese of Western Kansas, where he was the Dean of Christ Cathedral and a member of the Commission on Ministry. He previously served as President and Chief Development Officer of The Saint Francis Foundation, a nonprofit social services agency affiliated with the Episcopal Church. He has also served churches in Alabama, Texas, and North Carolina. David has a Master of Divinity from the Seminary of the Southwest, an MS from the University of Alabama, and is a graduate of Samford University.

David’s involvement with diocesan and nonprofit leadership includes Convocation Dean and member of the Diocesan Council in the Diocese of North Carolina and participating as a member of the Salina Law Enforcement Citizen Review Board, the American Red Cross, Crime Stoppers, and the Disciplinary Board for the City of Salina. He is a Paul Harris Fellow of Rotary International.

He and his wife Lisa, who is an attorney, have three children: Burton, who is married to Nicole, Mary Catherine, and Philip. 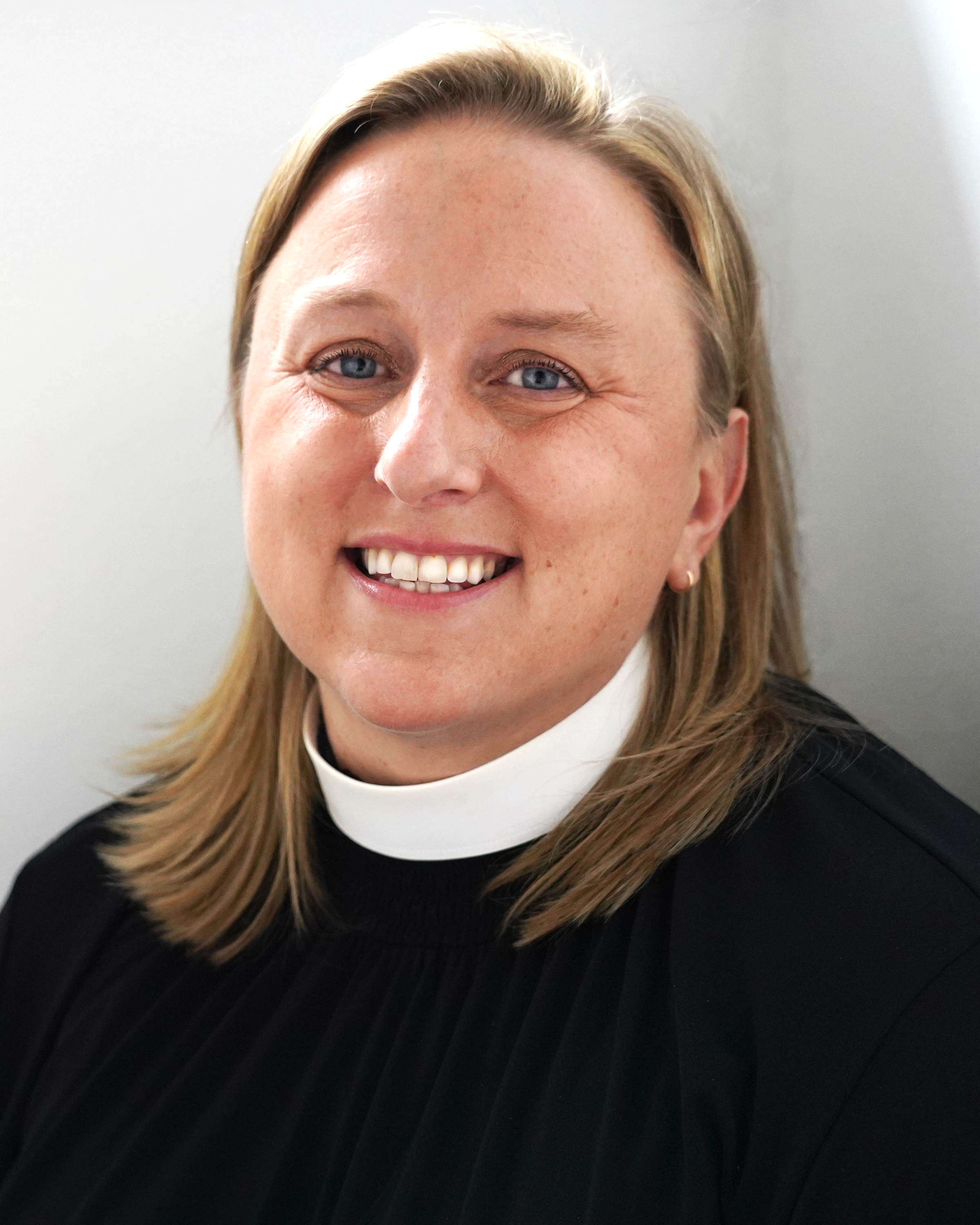 In 2007, Hopie served as the summer chaplain at Camp Beckwith in the Diocese of the Central Gulf Coast, which ignited her love of chaplaincy. Hopie’s first role in ordained ministry was as chaplain to the Episcopal School of Jacksonville, a 6-12 grade private school in Jacksonville, FL. She is the recipient of the Bishop’s Cross Award in the Diocese of Florida for her pastoral handling of a school tragedy. After five years as chaplain, Hopie and her family moved to St. Louis. In 2015, Hopie became the Executive Director of Magdalene St. Louis, a residential community for women survivors of trafficking, exploitation, and addiction. She stepped down in 2018 to begin her own business as a communications and graphic design consultant for churches and nonprofits.

From the beginning of her discernment to ministry, Hopie has been passionate about ministry outside of the parish. She has always felt most at home working with teenagers and young adults, and believes that spiritual development is an essential element in human development. Hopie is married to The Rev. Luke Jernagan and has three elementary-aged children. In addition to these loves, Hopie also loves her gym, cooking, traveling, and laughing. 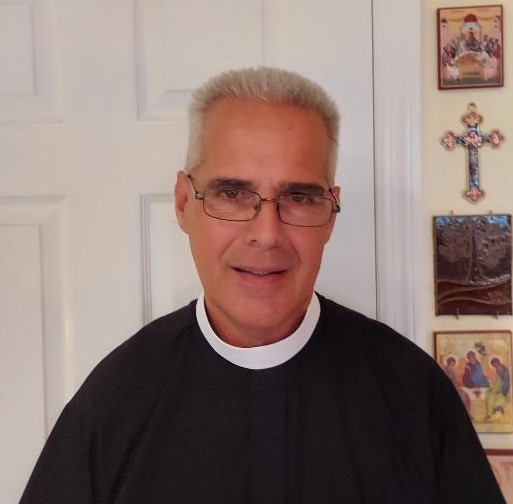 The Rev. David Malek has been serving since January 2021 as a Transitional Deacon at Christ Church Cathedral. He will be ordained July 24 and will continue his service at the Cathedral as a Curate on August 1.

After attending services at Christ Church Cathedral for two years, Dave and his husband Mark were received into the Episcopal Church in May of 2004. In 2008 Dave completed a Graduate Certificate in Spiritual Direction at the Aquinas Institute of Theology and completed the Master of Arts in Pastoral Studies there in 2011. Dave recently began to offer spiritual direction again at the Mercy Conference & Retreat Center.

Dave's sending church is St. John’s in Tower Grove, where he was a catechist and lay preacher there for several years. It was in this congregation that he heard a clear call to ordained ministry. In December of 2018 his discernment committee recommended that he pursue Episcopal priesthood and his priest-in-charge concurred. On May 23, 2019, Bishop Wayne Smith granted me postulancy.

Dave completed a field an 11-month field placement at the Episcopal Church of the Transfiguration in Lake Saint Louis. Bishop Deon Johnson granted him candidacy to holy orders in August of 2020. He was ordained a transitional deacon on January 23, 2021.

Dave lives in the Benton Park neighborhood of St. Louis City with Mark Brennan - his husband of 32 years. They share a home with their dog Bella and their cat Ariel. HIs hobbies include hiking, cooking, writing, traveling, gardening, photography, music, and the arts. 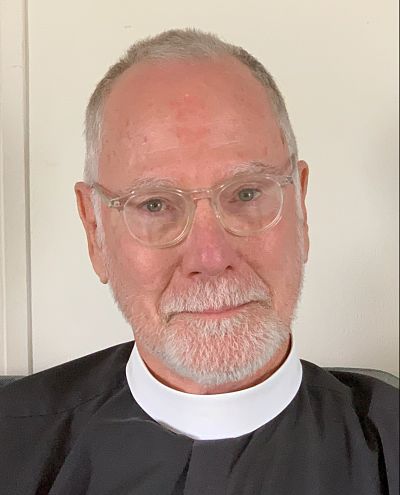 The Rev. Kevin McGrane, Sr. is priest-in-charge at Trinity Episcopal Church in St. James. A deacon in the diocese for six years, he discerned for the priesthood in late 2019 and was ordained priest in June of 2021. He serves on Standing Committee and the Creation Care commission.

Kevin and his spouse Catherine live on a 10-acre homestead called Windy Hill, where they tend goats, chickens, and a floppy hound dog. They have three children and 10 grandchildren. 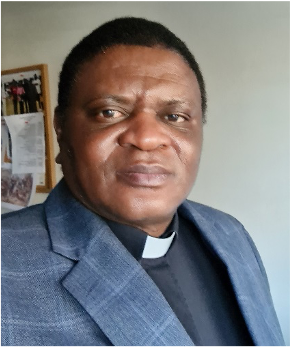 Michael worked as rector, editor, evangelist, and activist for creation in Tanzania. Rev. Michael and his wife own a vocational and training Center (Dodoma Vocational Training Center, DVTC), for boys and girls who did not get a chance to get college education. His family is still in Tanzania, and where his wife stayed with their last born who is in high school.

Michael says he felt a call in his youth to work as a missionary among white people, when he started to learn English through BBC (British Broadcasting Cooperation) radio programs.

While he studied at Eden Seminary, Michael served in a ministry that collected food for the homeless people in St. Louis.