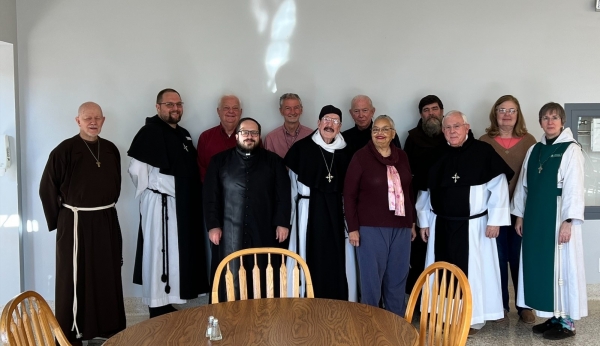 Members of religious orders and communities in the Diocese of Missouri came together January 20-22 to share their spirituality and give others the opportunity to learn more about their communities. The group participated in a 2-day retreat, followed by a special Evensong service to mark the first Religious Life Sunday in the Episcopal Church.

Cultivating the Fire of Faith: Exploring Religious Life and Contemplative Spirituality was the theme of the retreat at the Marianist Retreat Center in Eureka. Participants shared in community worship and fellowship, with presentations and discussion led by Rev. Dr. Kevin Goodrich, OP. The group looked particularly to the ministries and writings of the 14th-century English mystics Richard Rolle, Walter Hilton, Julian of Norwich, and Marjorie Kempe. Br. Kevin noted that while they lived in a time of plague, war, political instability, and social foment, all maintained a positive understanding of the human condition and potential for spiritual growth.

Of special pertinence to the participants was the spiritual direction given by Augustinian Canon Walther Hilton on what he termed “The Mixed Life.” Hilton held that those living in the world could and should achieve spiritual growth through a life balancing their worldly commitments to family, business, and public affairs with worship, study, prayer, and contemplation. This directly applies to those present who are members of dispersed orders, communities living consecrated lives under vows, but living and working in the world while ministering in their respective parishes, dioceses and communities.

The retreat followed the traditional monastic life with the sequence of The Daily Offices, each led by one of the communities present and reflecting their unique charisms and liturgical traditions.

Capping off the Weekend, members of religious orders and communities gathered at Christ Church Cathedral on Sunday evening, where Dean Kathie Adams-Shepherd officiated with the choir at a Choral Evensong commemorating Religious Life Sunday, with prayers for orders and communities and their members within the Diocese and throughout the Church.

Watch the keynote address by the Rev. Dr. Kevin Goodrich:

View photos from the event:

The 80th General Convention of the Episcopal Church approved a resolution naming the third Sunday of Epiphany as Religious Life Sunday in an effort to highlight and affirm the Episcopal monastic and Christian communities that offer spiritual growth practices, retreats, and hospitality, as well as welcome new members.

Religious communities in The Episcopal Church include monastic communities—whose members live together under a rule of life and vows such as poverty, chastity, and obedience—and dispersed Christian communities, whose members have jobs and live in their own homes, but who also live under religious vows.