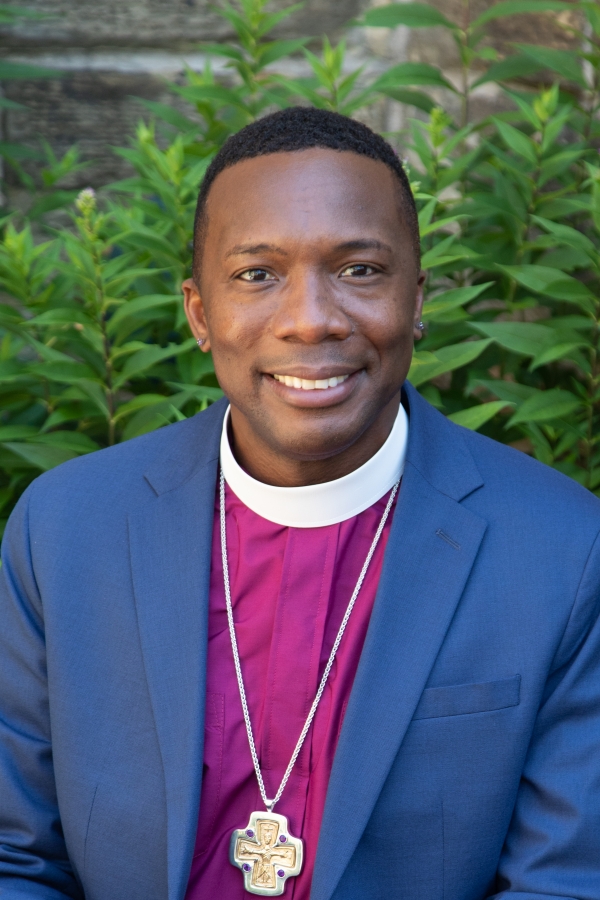 XI Bishop of The Episcopal Diocese of Missouri

Deon Kevin Johnson was born and raised in a small village on the Caribbean island of Barbados. His faith was formed under the watchful eye of his maternal grandmother who taught him how to pray, how to listen with his heart and introduced him to the beauty of worship in the hymns and spirituals she sang throughout Deon’s childhood.

His grandmother’s presence and prayers continued to influence him as he immigrated from Barbados to New York at the age of 14. “Leaving my mother and grandmother behind was perhaps one of the most difficult journeys my older brother and I could ever undertake,” Johnson recalls. “Because of their unconditional love, and the faithful witness of many others, I have been shaped into the person and priest I am today.”

After receiving Bachelor of Arts degrees in English and History and an Associates degree in Biology at Case Western Reserve University in Cleveland, OH (2000), he went on to earn a Master of Divinity degree from The General Theological Seminary in New York, NY (2003).

Deon served as Associate Rector at Christ Episcopal Church in Shaker Heights, OH (2003-2006), and most recently as Rector of St. Paul’s Episcopal Church in Brighton, MI (2006-2020). A veteran Episcopal priest with deep experience in social justice issues and ministry to gay and lesbian communities, he has served in many positions in the wider church and the community. He continues to serve on the Taskforce for Liturgical and Prayer Book Revision and as a consultant with the Office of Black Ministries.

The Episcopal Diocese of Missouri elected the Rev. Deon Kevin Johnson as its 11th diocesan bishop on Nov. 23, 2019, at Christ Church Cathedral in St. Louis. He was elected on the first ballot at the diocesan convention during an election that involved 164 voting delegates. He received 71 votes from lay delegates and 42 votes from clergy.

Bishop Johnson was ordained as the 11th Bishop of the Episcopal Diocese of Missouri on June 13, 2020, at Christ Church Cathedral in St. Louis. His ordination was originally scheduled for April 25, 2020, but the coronavirus forced a postponement of the event. Throughout the pandemic, Bishop Deon has has led with compassion and hope, redefining the mission and vision for The Episcopal Diocese of Missouri.

Bishop Johnson and his husband Jhovanny Osorio are the proud parents of two children, Lilohalani and Ja’Lon. He enjoys cooking, photography, hiking and being an armchair movie critic.