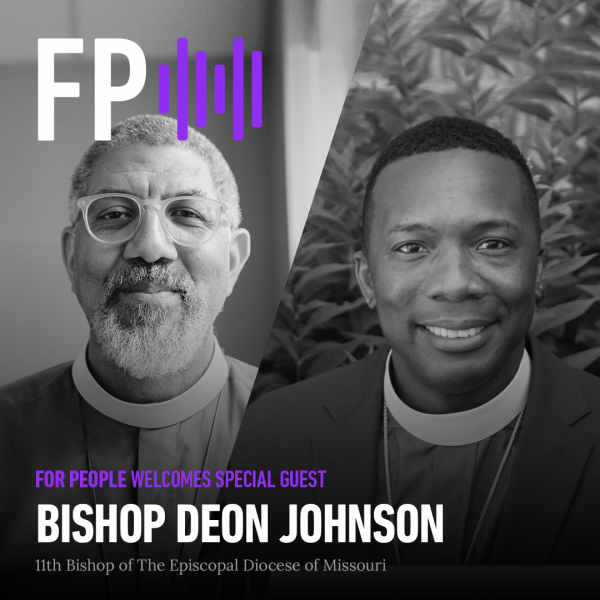 The episode is titled "Showing Up" and is available beginning September 16. The two bishops talk about dignity and share stories of grandmothers and Bishop Deon's favorite life lesson.

Bishop Deon also shares his good news of being a gay Black man in the highest level of leadership in The Episcopal Church. He speaks with kind candor to what he reads in the bible including its history and context.

Listen to the Podcast.

In this episode, Bishop Wright has a conversation with Bishop Deon Johnson, 11th Bishop of The Episcopal Diocese of Missouri. They talk about dignity and share stories of grandmothers and Bishop Deon's favorite life lesson.

Bishop Deon also shares his good news of being a gay Black man in the highest level of leadership in The Episcopal Church. He speaks with kind candor to what he reads in the bible including its history and context.

Bishop Deon Kevin Johnson was elected on November 23, 2019 as the eleventh bishop of the Episcopal Diocese of Missouri. He was born in Saint Philip Parish in Barbados. He spent his Sundays with family in church. His family instilled a strong sense of cultural heritage and pride which he still cherishes to this day. He has remained close to his family, and attends family reunions every two to three years. Deon’s love of religion stems from his grandmother who was engaged in theology.

Deon and his brother decided to move to the United States when Deon was 14 years old. They moved in with their father in New York City until their mother came to the United States two years after their arrival. Upon arriving in the U.S., he had to adjust to the different cultures that he was introduced to. He quickly rose to the top of his class and was enrolled in AP and honor courses in high school. He credits his education in Barbados for his academic achievements in the U.S.

Deon has been with his partner for over ten years, and they have been happily married since 2018. They have two kids, a twelve-year-old and a ten-year-old and one godson who is nine years old. He loves spending time with his family and enjoys the fact that his mother is currently living with him and his family.

Deon’s dream for the church is that the church is where there are no outcasts. He wants people to know that they can gather and not feel uncomfortable. The church is a place that reflects God’s vision of the world, but he also realizes that the church often gets it wrong. He offers an apology to his LGBTQ siblings on behalf of the church. He wants to get it right and actively works toward bringing people to Christ on a daily basis.

For People is a conversation with Bishop Rob Wright, spiritual leader to the more than 50,000 people in the 117 worshipping communities of the Episcopal Diocese of Atlanta. In this podcast, Bishop Wright meets listeners at the crossroads of faith and life to explore the challenges of an ever-changing world. Listen in to find out how he expands on For Faith, drawing inspiration from the life of Jesus to answer 21st-century questions.