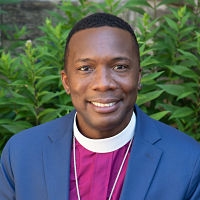 Missouri Bishop Deon K. Johnson has been elected to the Executive Council of The Episcopal Church. The election happened during the first day of the 80th General Convention.

"I am honored to have been elected to serve on the Executive Council of The Episcopal Church," said Bishop Deon. "This is an opportunity to be a companion with others from across the whole church to cast a renewed Christ-centered vision for our common life. God is calling the Church to do a new thing and I am thrilled to be a part of the vision casting."

Along with his election to Executive Council, Bishop Deon was also elected to serve as a Trustee on the Board of General Theological Seminary in New York. The Bishop is a 2003 graduate of General Seminary.

The 80th General Convention of the Episcopal Church is being held July 8-11 in Baltimore, Maryland.